We’re lucky in Lewes. Despite the worst efforts of Southern Rail we’re less than half an hour away by train from most parts of our county, Sussex, and not as much as an hour from the outer reaches of Hastings and Chichester either. Surrey isn’t much further away either. So for a considerable chunk of the south-east geographically we’re a bit of a hub. Add to that a Town Hall which is central, cheapish to hire, we can do our own catering, with flexible spaces, very co- operative staff, and prestigious too.

All in all our CLP is well-placed to put on events in the midst of a key General Election battleground; two Labour seats to defend, Brighton Kemptown, Hove and Portslsade, two of Labour’s crucial target seats, Hastings and Rye, Crawley and with the stunning breakthrough in Worthing of going from no councillors for 40 plus years to in the space of twelve months having 8, well East Worthing and Shoreham is fast emerging as a target seat for Labour to win too.

So how could our CLP make a material, practical contribution to Labour in our county, and beyond? Having already put on earlier this year a very successful ‘Corbynism’ event which was ideas-focussed we developed the concept of an activists’ training day. But to call it that would be a major turn off, instead the combination of the title ‘Activism Toolkit : A Day of Do-It-Yourself Labour Politics’, outstanding design and an imaginative range of speakers and sessions
made the event a very attractive package.

We have a good network of CLP and branch contacts which helped provide a steady flow of ticket sales, then there was an uplift after conference and finally a late surge. Over 100 tickets for an event sold for this type of event is very good. The solidarity ticket price, £10, enabled us to keep the standard ticket a very reasonable £5.

The TSSA and GMB were both generous enough to provide sponsorship. But we’re not interested in just slapping on their logo and banking the dosh. We made both unions central to the entire event, providing an invaluable input into sessions on using the media and community organising.

And we provided a highly visual version of Labour, the unions, campaigns moving forward together via a backdrop to our main space hung with banners filling every available space. A simple, yet hugely effective idea.

To get our considerable turnout we have shifted most of our publicity to social media, twitter and facebook in particular . With this we can target, mainly across Sussex, both individual activists as well as CLPs, branches, trade unions and campaigns. The high standard of design, geared to this media, is key too, with a constantly evolving event message. A growing email list of those who have attended our events is a big plus, selling the overwhelming majority of tickets via Eventbrite key to this contact-building

To ensure the event itself ran super-smoothly we are fortunate to have a growing team of helpers who pitch in on the day. Not only does this help ensure efficiency but also that the goodwill of our helpers is not over-exploited and thus they cannot enjoy the event. In addition we have those who have have specialist skills vital to the scale of our ambition, apart from design, sound, live tweeting, catering and banner-hanging too. Skills perhaps not fully recognised in a traditional Labour environment , but for an event a big plus. 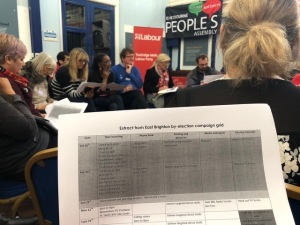 As to the content of the day , we include a Keir Hardie café and an Ideas Market . Good but reaaonably-priced food food, a great range of featured authors’ books to buy – signed editions, an interesting range of other stalls, and a raffle to win. Each added to our income considerably as well as the overall mix of the day.

Early on it was felt this should be a workshop-based event. Fortunately the venue lent itself to this. The ‘skills’ workshops followed 4 streams: design, media, community , elections. Comprehensive, yet signposted content. And we further increased the participative element by splitting the workshops into two part 90 minute sessions, offering different approaches o the subject. And most used at least some of this time in even smaller groups too. The opening and closing sessions were ‘all in’ but instead of a lecture or tub-thumping rhetoric used an in-conversation style which was widely appreciated.

Apart from Lewes CLP, participants came from almost every Sussex CLP, 2 CLPs from Surrey were very well represented too. CLPs came who hadn’t been before came as well as those our events have helped forge a better relationship with. Many were office holders, but a lot were those not currently involved in their branch or CLP, this was particularly true of those who came from our own CLP.

Our café both provides an invaluable space to network. The latter is a hugely popular part of the event, aided by the painstaking production of a participant’s badge for everyone, each listing name and CLP. It’s a break with the usual top down communication prevalent in Labour to generate horizontal, informal communications between neighbouring CLPs sharing the same county , over the curry, pasta, and mot of all cake.

The Ideas Market is likewise multipurpose. A showcase for our own CLP and our associated activities, alliance building with local campaigns, a space for participants to find out about these initiatives and make contacts.

Practical outcomes? Pretty pointless if none from an ‘activism toolkit.’ I counted ten:

First, many who came from our own CLP don’t come to branch meetings, the
event provided a means to engage with these members.

Second, an introduction to a variety of campaign skills.

Third, better networking between Sussex branches, learning from each other.

Fourth, introduction of Labour’s newly selected PPC for what is now a Tory
Marginal, East Worthing and Shoreham.

Fifth, a platform for our own forthcoming local council election campaign.

Sixth, identification of a number of ‘trainers’ to carry this campaign skills
learning further.

Seventh, establishing Lewes CLP events as a hub for the county, and beyond.

Tenth, we made money!

Our smallish CLP now has a growing reputation across Sussex , and beyond, for putting on well-organised events, of different types. This raises our profile across the county, and the confidence of our own members too. We have proved ourselves capable of producing a cracking day, with great speakers and creative
workshops of a sort not often found up and down the party. Of course this isn’t sufficient in itself to change our community, let alone the world, for the better.

But its an imaginative beginning, localising the learning process towards that shared aim. Most importantly we approach that ambition in way that is educational yet enjoyable, a combination that the writer and theorist Lynnne Segal has described as ‘collective joy’. Embrace that in the way that we organise and we’ll have a party ready for anything.

Mark Perryman was one of the organisers of Activism Toolkit: A Day of Do-It Yourself Labour Politics.  Editor of The Corbyn Effect, his new book Corbynism from Below will be published by Lawrence and Wishart.